Discover the beauty of Ethiopian coffees 2021


Get the Harvest Report

This is how our Q Grader Veronika Kečkéšová described the new offers from Ethiopia, which landed in our office in Zurich this January. A year of good weather brought the harvest forward and favoured flowerings and cherry development, filling them with sugars and yielding great coffees.

Download the harvest report to learn more about this year’s harvest and get an overview of the country below.

Ethiopia is the birthplace of coffee and the 5th largest coffee producing country in the world. Located in East Africa and with the size of France, Germany and the UK combined, Ethiopia is landlocked and exports its coffee through the port of neighbouring Djibouti. It is the second most densely populated contry in the continent with a very young population (the average age is 19) of which 80% is estimated to live in rural areas. Ethiopians are big coffee drinkers, consuming half of the country’s production. An overflowing cup of buna is traditionally prepared with ceremony and served to guests as a sign of the hosts hospitality and generosity.Coffee from Ethiopia is prized for its high quality with a common presence of intense floral notes and fruit-forward profiles. These qualities are attributed to the rich volcanic soils, high altitudes and good husbandry practices employed by smallholders, the majority of them growing coffee in garden type farms. It also comes from the fermentation of cherries and beans during processing and the intense manual sorting of beans on drying beds.

The country is divided in regional states and chartered cities, zones, woreda (districts) and kebele (wards). Coffee is grown in the Southern states (Oromia, Southern Nations, Nationalities and Peoples or SNNP and Gambella) and the main coffee growing regions are Sidamo, Yirgacheffe, Guji, Jimma / Limu, Lekempti, Harrar and Bench Maji. The names of Ethiopia’s coffee growing regions don’t overlap with the geographical regions. These denomination were created by the Ethiopian Commodity Exchange (ECX) for the purpose of classification and grading. Grades are used to designate the growing region and quality through a score ranging from 1 to 9. Grades 1 & 2 refer to specialty grades for both washed and naturals. Grade 3 to 9 refer to commercial grades and are differentiated according to defect count and cup quality. For example: grade 3 (13-25 secondary defects) and grade 4 (26-45 secondary defects). Yirgacheffe, Sidamo and Harrar are trademarks and are accompanied of a letter (A, B, C…) to indicate the subregion where the coffee comes from. In the specialty grades, the A and B designations refer to the presence or lack of the classic regional flavour. There is also UG (Under Grade) which is used to designate a commercial coffee usually sold at the domestic market.

We were really surprised by the cup profile of Boledu Aricha Grade 1 Natural coffee. After a long search on Ethiopians coffees in 2020 we couldn’t believe that we've finally found this beautiful one! The cup profile of this coffee brings us memories of the great Ethiopians that we used to enjoy some years ago and we’ve been missing ! It is extremely fruity with lots strawberry and red berries ! Also what we really appreciate is its mouthfeel which is really heavy and very clean! 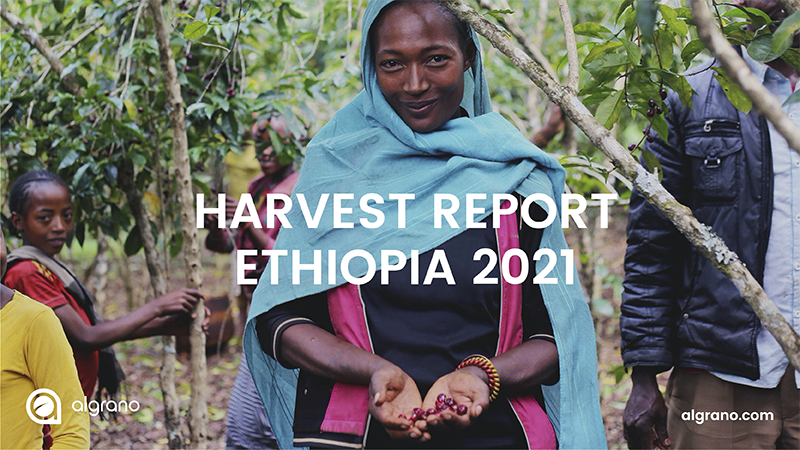